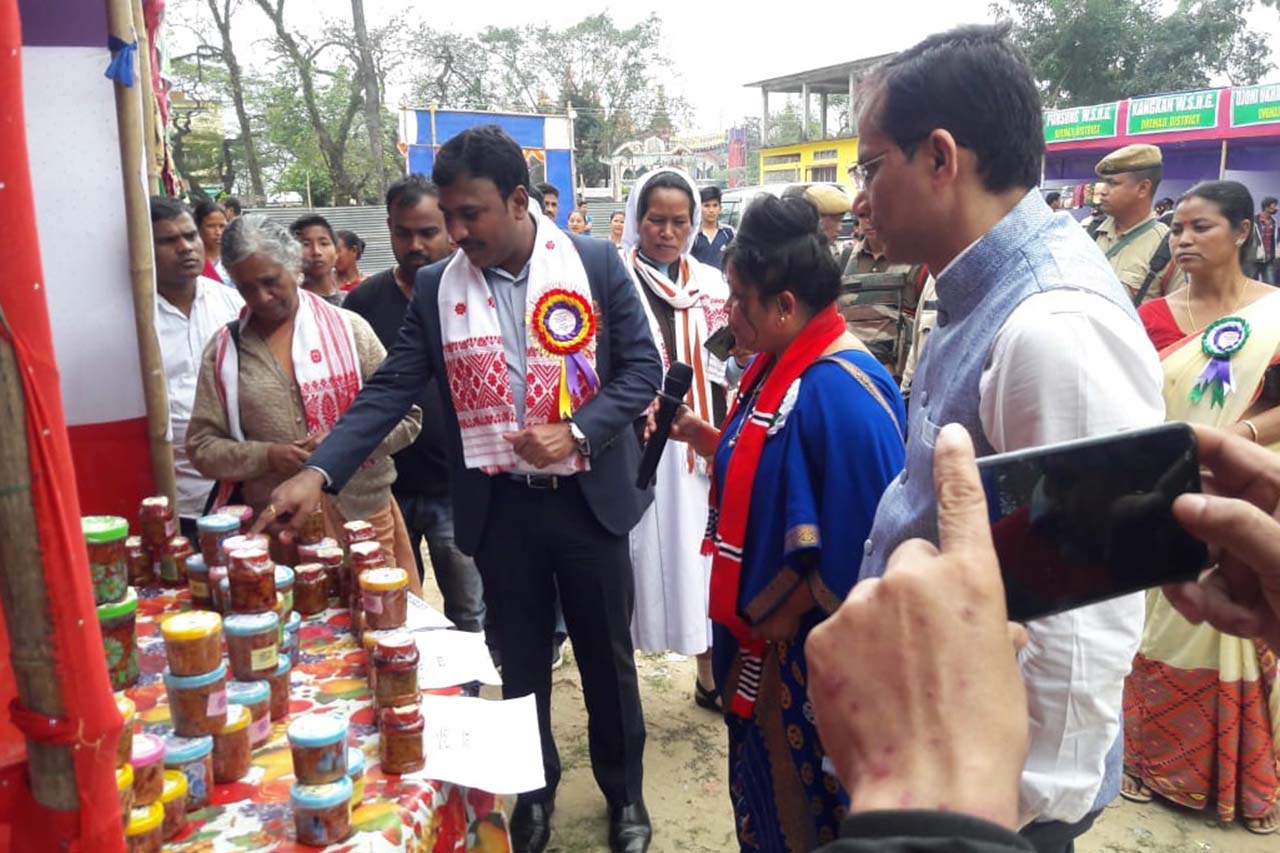 No Comments on Women are stronger than anyone can imagine, celebrated the endless women PowerNews wdcadminOctober 23, 2020October 24, 2020Deputy Commissioner Shri Narsing Pawar

Women Development  centre  an NGO  from  Guwahati has organized an  exhibition-cum-sale was organized on dated 7th & 8th March 2020 on the occasion of  International Women’s day at Gogamukh Nagar High school, of Dhemaji District of Assam.  The Women Self Help Groups (WSHs) of Dhemaji from two blocks participated for the two days exhibition. These groups was formed & nurtured under the most backward & Extremist District declared by Govt. of India since 2012-13. NABARD supported the project where Women Development Centre, Guwahati implemented the project and handhold in the March 2018. Through NABARD various skills training was conducted for the members on design development, diversification of Tribal Textiles, Pickle making, Mushroom cultivation, Food Processing & Preservation & cutting & tailoring which the members were exposed sell in the local market.

The event was inaugurated by the Honorable Deputy Commissioner Shri Narsing Pawar, IAS, Dhemaji He encouraged the women to the core with his   opinion saying “It is not just WSHGs, but the entire system of learning, taken as a whole, that women make a complete individual of tomorrow.” He also told that becoming women entrepreneurs as Dhemaji has a great potential in Agri/Horti/Sericulture/ Food processing/Handloom & Handicrafts where women can play a great role and get support from the departments with schemes which they are eligible. Director of WDC Sister Betsy welcomed the gathering and the dignitaries  DDM NABARD Mr. Samarendra Das, the Lead District Manager Pradip Kr. Khaklary, UBI, Dandeswar Buragohain the Headmaster, Nagar High school Gogamukh, Deputy Commissioner Shri Narsing Pawar, IAS, Dhemaji visited the Exhibition stalls and encouraged the women in particular. He also advised them to take more Govt benefits and produce more for a financial boost for their family.

On 8th March 2020, was observed the International Women’s Day. More than 250 women gathered from Women SHGs which was a cause for celebration & pause and remembrance, an inspiration and a time to honor, love and admire & to honor womanhood. Mrs. Rupjyoti Baruah, Mrs. Joya Gohain the retired School Head mistress were the Chief Guests and  Gust of honor They  addressed the gathering and told them that there should be a balance between career and family and without a family support a women can’t achieve success, also addressed that girls should know their right to defend themselves and be careful against crimes against women., Sr. Marina, Dandeswar Bura Gohain also shared of struggle and success.

WDC awarded certificates for best stalls, best dance performed, winners of different games played, successful completion of MEDPs & also for the best products made during the out of Ten MEDPs and the two days event was concluded with a vote thanks

Ms. Bhagyawati Bhuyan the Project Director WDC took the initiatives along with her team for the two day’s event. She informed saying that the objectives of the exhibition were to create an opportunity to reach out to audience in towns & districts from the rural remote villages with a diverse interest in the market and the products on display.

Women are stronger than anyone can imagine, celebrated the endless women Power